Derby is a fantastic city to discover by bike. The majority of our roads and cycle paths are flat, the city is compact and accessible and there is always a new destination to head for. In and around the city there are an abundance of parks – all suitable for cyclists of all kinds – Allestree Park, Markeaton Park and Darley Park are all great to explore as is the Arboretum – the first public park in England.

Make sure you don’t miss the BMX race tracks at Alvaston and Mickleover and the city’s wheeled sports freestyle areas at Sunnyhill, Osmaston Park, Alvaston and Markeaton.

One of Derby’s best cycle paths cuts straight through the city centre along the banks of the River Derwent. This great route from Darley Park passes the famous Derby Silk Mill – one of only a handful of World Heritage Sites in the UK. On the outskirts of the city, but still in easy reach, are the breathtaking stately homes of Elvaston Castle, Calke Abbey and Kedleston Hall. These huge period houses allow a glimpse into Derby’s past and are well worth a visit.

The Derby Cycle Map here is a fantastic resource to help you plan your route.

The Cycle Derby site has loads of useful info and you can dowload the app. 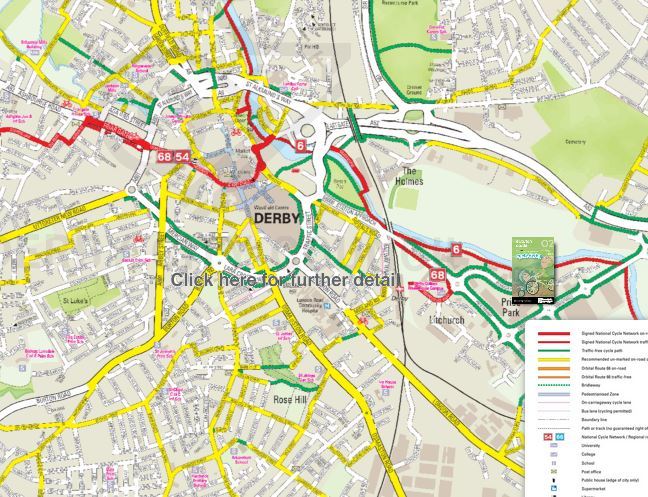